RJC Dance has entertained audiences nationally and internationally for over 25 years with their unique blend of skill, passion and sheer physical presence on stage. For the first time in over ten years the organisation most recently returned from a highly successful ‘STILL BLAZIN’ Tour in North Yorkshire as part of Rural Arts’ CREATE Tour! Below is a journey through a dynamic experience of the organisation's repertoire since 1993! 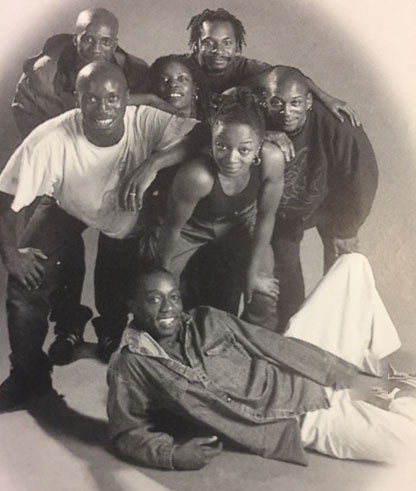 RJC Dance first full-length production. Our Hearts Cry Out was a sell-out national tour visiting more than 30 small scale venues and an extensive education programme of work in schools and community settings. 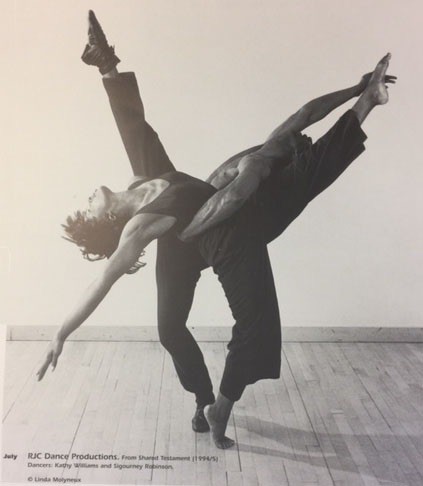 RJC Dance premiered Shared Testament featuring noted gospel singer Howard McCrary who composed the score and sang live in performance. This production established RJC Dance in middle-scale UK venues and its popularity enabled an audience development programme which has become part of an integrated model. Throughout the tour , RJC Dance worked intensively with community groups over a two or three day period prior to the show, to incorporate them into the performance programme. RJC Dance gave 37 performances of Shared Testament involving 19 community dance groups and 7 community shows. 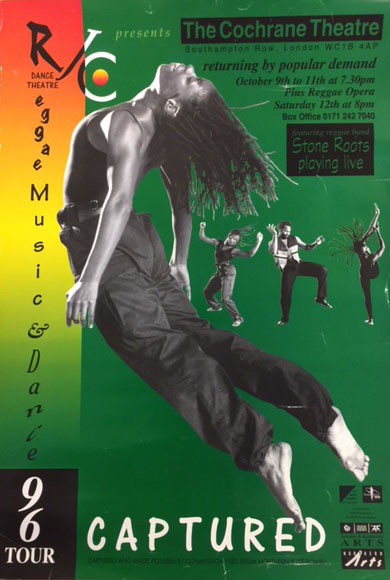 RJC Dance presents its 3rd national tour 'Captured' a most ambitious project,with a specially commissioned score by Leeds Reggae musician Junior Willocks and Reggae Band Stone Roots playing live. Due to its popularity Captured toured throughout the Spring, early Summer and Autumn of 1996. RJC Dance gave 49 performances of Captured throughout the UK with 32 community dance groups working with them in the production as they toured around the country. The production explores the 'R' in RJC Dance, Reggae, and follows its earlier two highly successful National tours 'Our Hearts Cry Out' and Shared Testament' in exploring the music dance and culture that have formed the creative explosion that is RJC Dance heritage. Captured is a collection of dances set to live Reggae music. The theme for the dances are captured moments of Reggae history and looks at the personalities that have been important in the development of Reggae culture, the musical career of Bob Marley and the influence he had, and still has, on Reggae culture. It also featured the music of British and Jamaican artists who have kept the culture alive and hot, influencing past and present generations. 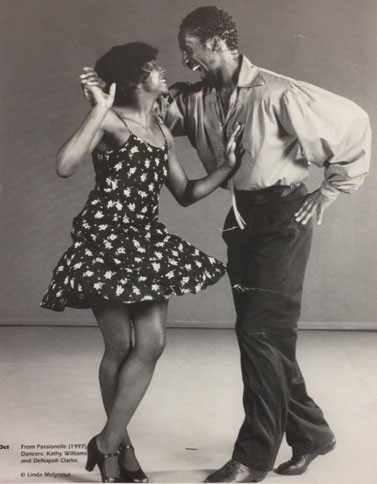 RJC Dance premiered Passionelle in 1997, inspired by Salsa, Merengue and Capoeira movement. This production was a change of style for the company. For Passionelle, the company expanded to include four women and five men, to present an evening which celebrated the complexities of dynamics and style which are part of the historical origins of Black Dance.The production toured nationally. 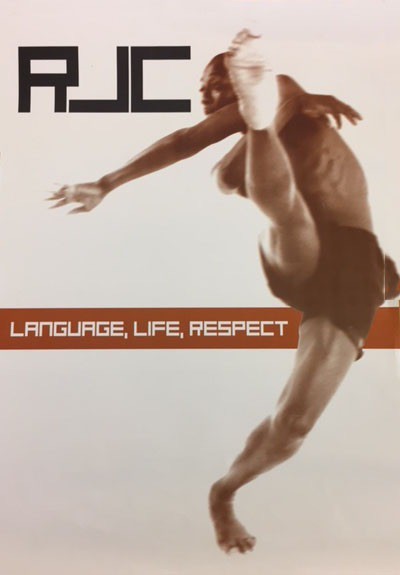 RJC Dance premiered Language, Life, Respect which completed the trilogy of reggae productions with 'Captured' (1996) and 'Passionelle' (1997). For this production, African, Caribbean and Latin American traditions were blended masterfully with contemporary dance techniques. The production toured the UK and extensively in Southern Africa. 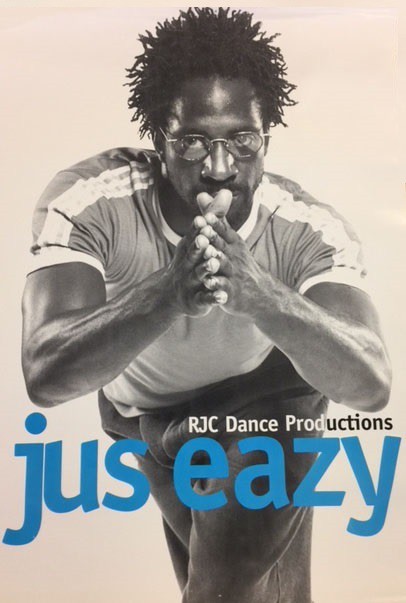 RJC Dance programme of activity celebrated the diversity and creativity of urban culture into the next millennium. 'Vibe' which formed the foundation for this programme of work, was an experimental club project facilitating an artistic collaboration between RJC and Eyecatcher Digital Film Production Company. Vibe was performed in clubs and on tour in rural venues in the North of England.

Co - commissioned by the Yorkshire Arts Rural Touring programme, Vibe was a fast moving production which drew inspiration from RJC Dance repertoire of reggae, ragga, salsa and jungle, capoeira and club dance, with an impressive live band line up.

RJC Dance also premiered Krazy Spirit, which toured the UK with a combination of contemporary club dance, reggae music in a rites of passage tale told in five dance works from different choreographers. Framed within RJC Dance inimitable styles of reggae, jazz and contemporary dance, Krazy Spirit was an urban dance experience which followed the central character as he questioned the rhythms of his own life.

RJC Dance premiered J to RnB, a production which toured nationally with three male dancers and a live saxophonist. Inspired by Legends like the Nicholas Brothers, J to RnB looked at the influence of jazz dance on club dancing styles, with reference to Latin, Hip Hop, Soul and R&B.

The meaning of SOMA is captured within three pieces of dance representing Mind, Body and Spirit, individually choreographed by Edward Lynch, De-Napoli Clarke and Douglas Thorpe.

SOMA is a strong RJC Dance contemporary dance performance which encompasses the art of New Classical Release, Contemporary Style movement and a new dance technique form 'Naptech'. The performance resonates with RJC Dance distinctive powerful energy and form which draws its choreographic inspiration from a dynamic fusion of reggae, jazz and contemporary techniques.

De-Napoli Clarke is the inspiration for this spectacular show, which fuses a programme of dance works combining capoeira, martial arts, naptech, reggae and jazz dance styles, celebrating the defining moments in his life. With an explosion of physical and rhythmical dance movement styles and original new music from Kabin Fever, THE DANCICAL is a unique and hugely entertaining dance experience.

HALO is a biographical solo piece of work created and produced by De-Napoli Clarke, Artistic Director RJC Dance 2008. It is an insight into his bright and happy but sometimes dark and moody life, what makes him tick and what makes him slip.

The show presents his pain and torment when an unforeseen and unprovoked attack prevented him from pursuing his first love. In the attack, his neck was broken, leaving him immobilised from his neck to his head by a Halo Traction screwed into his skull in four places.

HALO is expressed through a combination of contemporary and reggae dance styles underpinned with martial arts movement, as he takes you through his mental and physical pathway to recovery.

“This was my most major injury to date” says De-Napoli, “but one from which I have become a stronger, wiser and more determined man, who lives to dance and dances to live!”

RJC Dance, back on the road for the first time in over ten years with their new show Still Blazin’ February 2018. Still Blazin’ is a high energy dance show performance by 5 dancers who took audiences on a journey through a dynamic experience, re imagining RJC Dance past repertoire. Including pieces such as De-Turf, Jazzical and Pantsalot, the show delivered a feast of dance styles that amazed and delighted all generations. The Stll Blazin' kicked off at Thirsk Town Hall with a showcase performance event before going on to Redcar and East Cleveland and included a community engagement workshop working with local young people as part of Rural Arts’ CREATE Tour! RJC Dance have been commissioned to tour rural North Yorkshire in 2019 and 2020.

Donate now
Your contribution can help us bring dance to everyone in our community. Learn how.
Get involved
Learn about the opportunities we can offer your children
Studio hire
Our high-quality studio is a perfect rehearsal and performance space. Hire now.
What’s on
See where RJC Dance are performing and the workshops we have lined up

Keep up to date with RJC Dance's latest events, news and exclusive content
RJC Dance keep your data safe and secure. Please refer to our Privacy Policy for more information

Keep up to date with RJC Dance's latest events, news and exclusive content
RJC Dance keep your data safe and secure. Please refer to our Privacy Policy for more information